Last week I turned 41, which sounds really old to me but I know its not because obviously I’m not old at all, am I? am I? It hasn’t made me sit down and ponder the meaning of life as I hurtle towards middle age but I have been thinking about practical stuff like babies, tick tock etc. And more specifically, about me having another one.

My soon to be ex husband and I were together for 14 years, we had a number of miscarriages and finally had a baby girl, Lucia. She arrived rather early at 28 weeks and though she is absolutely fine health wise, she is now four years old, it is not unusual for preemies to have on going health problems. Not to mention the scary stats about percentage of survival rates when they are first born. Lulu was in intensive are for nine weeks, I was exhausted, my husband was exhausted, it was hard. My husband and I had discussed having another baby but decided to wait a year and then of course he left me so he was out of the equation entirely.

A big part of my anxiety after he left was the thought that he had taken with him my last chance to have another child. I was 38. How would I ever find someone else I wanted to have a baby with? I’m clearly not in my first bloom of youth, health complications mean that if I want to get pregnant (that part that is not usually a problem for me), then I have to spend six months prior to conception leasing with my specialists and amending the doses of medications that I take regularly but which can affect a baby. There would be none of that, ‘lets see what happens’ kind of stuff! There would be anxiety surrounding a possible miscarriage and even if I got through the first three months there is a high chance that my next baby would also be premature. And then even if all the above went well there is a high chance that I could come out of remission of a chronic illness that I have. Not looking so rosy now that I’ve written it all down. Not to mention thinking that should I actually find chap then it would be best to know him for at least a year pre getting knocked up, just to make sure he isn’t mad/married/UKIP voter, and then there is the small point of needing him to want to have a baby with me. Phew, exhausting stuff. 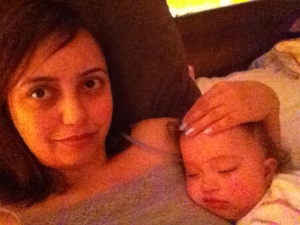 I also wonder if my broodiness is linked to the fact that soon I won’t be able to have a baby, age etc. nice chap in tow or not. Ladies, don’t we spend so much of our lives fretting about getting pregnant when we don’t want to that the idea of not being able to get pregnant even if we want to seems just odd?

Thats a lot of stuff swirling around in my mind.

Here is the reality at the moment.  I have found a very nice chap, he isn’t mad keen on having a baby but would consider it if it was very important to me. He has two delightful tweenagers of his own. I still find looking after Lulu exhausting but as she gets older I am starting to reclaim some of my ‘grown up’ time. Ironically, since my husband left I have more time then i ever did to recharge my batteries as he sees Lulu every every Monday and Tuesday night and every other Saturday. So a big part of me, the selfish part, likes the routine Lulu and I are now in. My divorce is nearly over, I own a house and a big fat mortgage, I am off to Oxford in January to start my phd (fingers crossed), I will still work full time and commute to London, Lulu will be starting primary school in September and I already feel there aren’t enough hours in the day to do want I want and need. Life is finally settling down for Lulu and me, she is happy, I am happy. 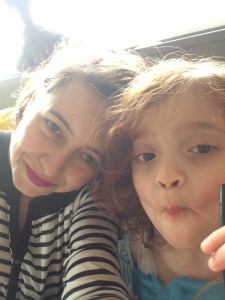 I don’t think I have any reserves of emotional energy left to deal with losing another baby, I don’t want to be sad and for Lu to see me that way. I just don’t have the energy for another baby if I’m honest. People have commented on Lulu being an only child but I’m okay with it, I was an only child and it really wasn’t that bad! Don’t misunderstand, I wanted lots of children but it just didn’t turn out that way. If I was in my 20s or 30s this post may be a very different one but I’m not, i’m in my 40’s.

I worry that I may regret my decision not to have more children but I know deep down that for me and my child it is the right choice. I shall continue to coo over friends babies but then I get to hand them back when they cry/poo/vomit. I have a fantastic brood of god children, 6 in all, who I can spoil, so I count myself very very lucky in the children stakes. And if my broodiness becomes overwhelming then I shall revert to my back up plan – a pair of sausage dogs.

Flowers are always a good idea.

Livia, our sausage dog whom we just adore

My mum, who never listens to me but loves Lulu beyond measure.

My version of chronic illness

My new husband, we live separately. Its complicated