Following on from my last post, The Big (gluten) Free Apple, I thought i’d let you know what the food was actually like at the places that I went to. 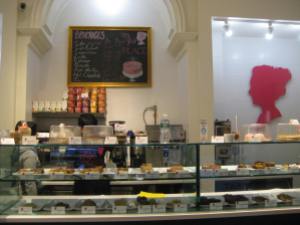 Pips Bakery pipsplacenyc.com I was so excited about this place and it did not disappoint. There are  a number of gluten free bakeries in New York, such as Tu-Lus and BabyCakes NYC, but I loved the look of Pips website and they had a shop right around the corner from my hotel which clinched it for me. There were lots of great looking cakes and muffins but, to be honest, when I find gluten free cake I am drawn to the things I would rarely make at home so when I saw the gorgeous chocolatey loveliness of their freshly baked eclairs I knew that it was the cake for me. They also fill their eclairs with creme patisserie instead of cream which I prefer. I think the photos say it all.

I want back the next day but there were no eclairs (boo) so I had a slice of coconut cake which was very coconutty and very moist. They have a little counter for eating so I perched there with my coffee and watched the world go by, I would highly recommend this place. 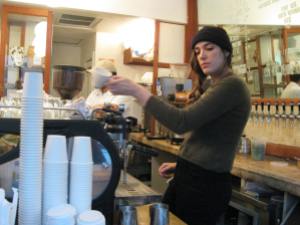 El Rey www.elreynyc.com This isn’t strictly a gluten free place but I didn’t go there for food, I went for coffee and it was great. I’d read about it in Bon Appetit (December 2014) magazine that the boyfriend had brought back from his last trip to New York and there was a glossy article about this new very cool spot. As soon as I received my invitation to NYC I dug out the magazine and brought it with me. El Rey is described as a luncheonette which is such a lovely old fashioned sounding word. Again, like Pips, it is small but oh so perfectly formed. Its a little off the beaten track, I went after a tour of The Tenement Museum,http://www.tenement.org, which is near by, and both are well worth the effort. I rambled on at the staff about the article in Bon Appetit and how lovely the place was and they were totally amenable to me taking photos. It was a warm haven from the cold snowy streets and the coffee was delicious. The most beautiful thing was the glass beehive water cooler but I didn’t get a photo, silly me. 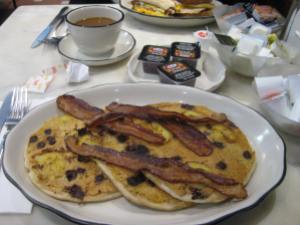 Bloom’s Deli www.bloomsnewyorkdeli.com This place had been recommended on a few gluten free blogs, and their chocolate and banana pancakes were highly praised so it was naturally the first place I went to the morning after we arrived. It it was super early so that the boyfriend could come before he headed off for a day in the office. Ps. His office is in the Chrysler Building, such a beautiful place, he is a very lucky man. These are the infamous pancakes and they were, well, ok but I must be honest and say that I wasn’t blown away. I make griddle pancakes for Lulu (and my boyfriends children when they stay over) on a Sunday morning and I have to say that they are rather nice. Nicer than those in America (whispered). The chocolate in America is very different to that in the UK which I wasn’t keen on, I think next time I’ll order one of their Ruben sandwiches which also gets high praise. There is actually a dedicated gluten free menu so there is plenty of choice.

I shall tell you all about Lilli & Loos, Risottorea and Friedmans soon (Spoiler; they were all just amazing).

Flowers are always a good idea.

Livia, our sausage dog whom we just adore

My mum, who never listens to me but loves Lulu beyond measure.

My version of chronic illness

My new husband, we live separately. Its complicated